The No Way Back Company organises the yearly Detours Festival in different cultural locations in Brussels and the pedestrian zone of the City of Brussels.
3 months of urban arts madness with dance creations, concerts, exhibitions, circus acts, experimental battles, films…

The Detours Festival lies at the crossroads of urban and contemporary cultures, between the street and the stage, the present and the future. Over the past seven years, the festival has been offering an offbeat look at society and our values with a committed discourse and the conviction of contributing to a certain kind of evolution. Purposefully coming from a hip-hop background, the Company does not deny its origins but sublimates them. The Company uses its disciplines as tools of creative expression to uplift reality. Fed by its influences, the Company does not shrink from mixing up styles to reinforce its message.

The Detours Festival is both a showcase for complete works, a springboard for ongoing creations and a vector of social cohesion.

Find out more on: www.detoursfestival.be 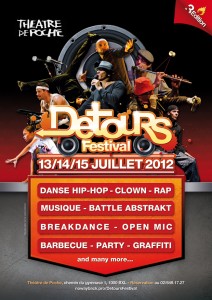 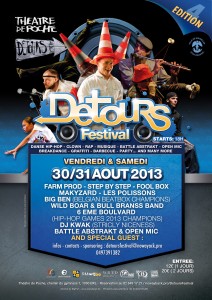